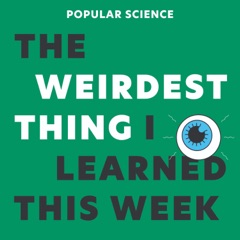 The Weirdest Thing I Learned This Week

At Popular Science, we report and write dozens of science and tech stories every week. And while a lot of the fun facts we stumble across make it into our articles, there are lots of other weird facts that we just keep around the office. So we figured, why not share those with you? Welcome to The Weirdest Thing I Learned This Week. Support this podcast: https://anchor.fm/popular-science/support