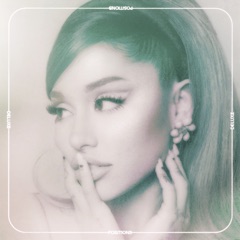 Unlike Ariana Grande’s last album, the contemplative and mournful thank u, next, which was released shortly after, and partly in response to, the tragic death of her ex Mac Miller, Positions is lighthearted and playful—a flirty wave from the other side. Her joy is deserved. During a grueling stretch that would have broken most musicians (a deadly terrorist attack at her own concert, Miller’s overdose, and her public breakup with then-fiancé Pete Davidson), Grande delivered two of the best albums—and one of the highest-grossing tours—of 2018 and 2019. That she might finally be experiencing some release, which is what these songs sound like, is a reminder to all of us that time and reflection can heal. So let’s move forward, shall we?

Grande doesn’t waste a single second changing the tone. “All them demons helped me see shit differently/So don’t be sad for me,” she coos on “shut up,” the album’s sweeping, orchestral opener that puts trolls on mute. Strength and self-assuredness are themes throughout the album, and she gracefully takes credit for positive changes. She’s meditating and minding her karma (“just like magic”), blissing out on healthy habits and sexual vim (“nasty,” “34+35”), and diving into new romances without worrying too much about getting hurt (“safety net” featuring Ty Dolla $ign, “off the table” featuring The Weeknd). The implication is less about casual detachment and more about living in the moment: Pain and loss are a part of life, but so are pleasure and love. She seems acutely aware that we have little control over any of it.

Accompanied by longtime collaborators like singer-songwriters Tayla Parx and Victoria Monét and producer Tommy Brown, Grande deftly explores new rhythms and moods—breathy retro-funk (“love language”), low-slung R&B (“west side”)—without drifting too far from soaring pop. “motive,” a duet with Doja Cat, tastefully shuffles between lurching trap and four-on-the-floor club beats. And the staggering “my hair,” easily an album highlight, feels like a late-’90s girl-group power ballad on which Grande effortlessly carries each part. Importantly, it never feels like she’s trying sounds on for size; she is the rare singer with a voice so powerful and an aesthetic so self-assured that subgenres, collaborators, rules, and trends all bend to her.

Released four months later, the deluxe version includes four bonus tracks and a remix of “34+35” featuring Doja Cat and Megan Thee Stallion. While there’s still talk of troublemaking and bad behavior, Ari may actually have settled down. In December, she announced her engagement to Dalton Gomez. “You got me trippin’/I adore you,” she sings on “main thing,” a head-over-heels ode to a special someone. It’s the last piece of the extended positions puzzle, but may also be the start of an exciting new chapter.

Ariana Grande
Pop
2:09
2021-02-19
© 2020 Chartoo. Available on Apple Music. Last Updated on 3/7/2021, 5:04:56 AM. Apple, the Apple logo, Apple Music, iPad, iPhone, iPod, iPod touch, iTunes, iTunes Store, iTunes U, Mac, and OS X are trademarks of Apple Inc., registered in the U.S. and other countries. Apple Books, App Store, and Mac App Store are service marks of Apple Inc. IOS is a trademark or registered trademark of Cisco in the U.S. and other countries and is used under license. QR Code is a registered trademark of Denso Wave Incorporated. All other trademarks, logos, and copyrights are property of their respective owners.
DesktopTabletMobile
Preview provided courtesy of iTunes
Preview provided courtesy of iTunes